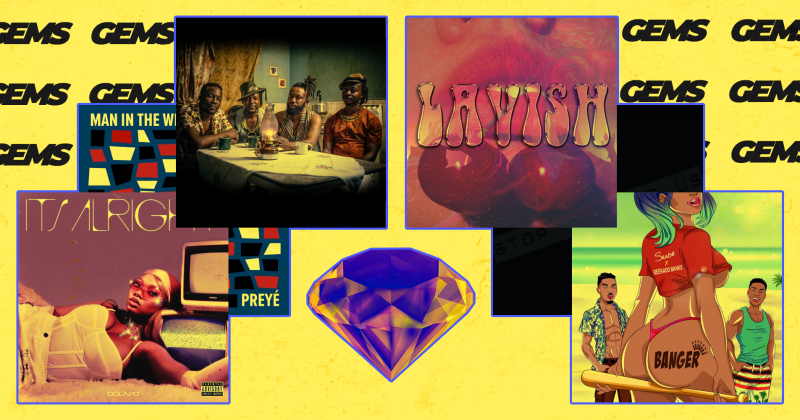 GEMS: A List of the best songs released this week

DAP the Contract – “Love the World”

DAP the Contract’s consistent streak with releasing new music is matched by his flair for lived-in and substantial thematic content. Two months ago, the rapper/producer opened his account for the year with an EP, ‘Powers, Vol. 1’, and he recently updated the project with a deluxe edition that adds three new tracks. The additions are mainly a reflection of the grimness that has enveloped our world in the past month, and on the standout cut, “Love the World”, DAP lets his world-weary feeling roam free on wax.

Unfiltered and honest without being overbearing, “Love the World” finds DAP untangling the madness of injustice, racial and otherwise, adding a conspiratorial edge to his observations (“that iPhone close your third eye till you see none”) and letting us in on his relationship with the concept of a higher being. Amidst all of this, he makes a resolution to love the world while dealing with all its craziness, because that’s the best we can do lest our outrage push us into total darkness and nihilism. DAP’s careful optimism is matched by his gently propulsive flow and radiant boom bap production.

Ictooicy has been teasing her loyal following with her fourth drop for a while now and it’s finally here. ‘Lavish’ was rolled out earlier this week and impressively shot up to the #4 spot on Apple Music Alternative charts within hours of its release. With features from Fasina and 234jaydaa, who contribute sonically to her youthful tales of romance and chaos, Ictooicy delivers her most adventurous drop yet.

The closing track “Attitood” is probably the project’s most enjoyable number, boosted by its airy synths and vivid percussions, Ictooicy apologises to friends for switching up when her moods get sour.  The track seems a bit like a dialogue, as she talks and sings over the beat, explaining the process behind landing such a great beat and proclaiming it the best Icy song ever.

“Please don’t hit me up when I’m not in the mood/I don’t really like giving you that attitood” she sings, reinforcing the song’s title as she pleads to be left alone even though she has two phones – one for the text, one for the road. Bad moods are like an itch that just becomes worse the more you scratch, and communication tends to be a bit harder when there are mood swings involved. We love to see Icy being emotionally intelligent and taking space when she needs to, in order to communicate better.

The legendary reggae singer Bob Marley famously sang, “Get up, stand up, stand up for your rights”. On her new reggae-infused single, “Man in the Wind”, Preyé taps into the spirit of Bob Marley’s sentiment without mentioning his name or invoking those particular lyrics. Burning with a righteous anger toward the myriad of unjust acts that are unravelling society, the singer charges listeners to go beyond digital activism and take to the streets in order to ensure change happens at a faster pace.

These past few days, outrage has been the common denominator in our existence, with many people taking to the streets to protest and more people expelling their disdain through social media platforms. While the latter has been integral to heightening awareness, educating more people and fostering a communal sense of moral responsibility, Preyé is far more enamoured with the boots-on-the-ground approach since it’s far more radical—and radical might be what we need most right now.

“Nothing gets better if the trespassing is punished by another man’s sin”, she sings over the assortment of whirring guitars and marching drums. For the most part, she’s not invalidating the efficacy of activism through social media, but she justifies her stance through the contagious annoyance and defiance she puts into her delivery.

South African band, Urban Village, have just released a new song, “Izivunguvungu” and it builds on the traditional appeal of their powerhouse match-up. The 4-man band have continued to develop their reputation for performing acoustic melodies rooted in traditional Zulu sounds.

Given the unpleasant state of the world today, “Izivunguvungu” plays out like an escapist antidote with the enchanting mix of the synths, drums, horns, percussion and otherworldly vocals, which reenact the spirit of a community whose history is marked by their fight against apartheid.

The band described the song as “Inspired by the Zulu traditional music genre called Isicathamiya, a male opera style of music that Zulu migrant workers performed together. “We blended the rural traditional music with a modern sound. It’s a song about striving to overcome the storms and hardship of life, about the promise of the return home,” the band mentioned in a press release. Like other South African songs which have crossed over to the rest of Africa like “Khona”, “Izivunguvungu” is enchanting enough to convey the song’s message clearly enough.

British-Nigerian singer, Dolapo is definitely an artist you should be paying attention to. The talented singer has been rapidly making her way up the music scene in the UK owing to her smooth blend of r&b and afrobeat melodies. She’s incredibly gifted at delivering relatable lyrics about love and life, sure to resonate with anyone who’s been through similar struggles.

Her new single “It’s Alright” is the latest object of our listening obsession. Dolapo offers a startlingly modern take on r&b with colourful vibrant vocals that are reminiscent of artists like SZA and H.E.R. “You ain’t never had someone to change your life/make you wanna upgrade put that shit behind” she sings, speaking her truth about unworthy past lovers on top of harmonies and melodies that seem to swell and shimmer with each notable lyric. Get into her latest this weekend, her buttery smooth vocals make for an overall gratifying listening experience that reveals something new each time it’s revisited.

In 2018, Skiibii‘s career grew from publicity stunt acclaim to nationwide cool after his song, “Sensima” featuring Reekado Banks dominated DJ sets and radio airwaves. He followed up the song’s success with “Daz How Star Do” featuring Falz and Teni but his subsequent releases, “Omaema” and “Big Engine” slowed his momentum as they didn’t receive much attention from fans. Skiibii’s debut single for 2020, “Banger” is set to get him back on the track he started out with, as he reunites with Reekado Banks to deliver another unforgettable track.

Much like “Sensima”, “Banger” brings out Skiibii and Reekado Banks’ confidence in their craft. Produced by RhymeBamz, the party-driven beat serves as the perfect backing for singers to woo their love interest with adoring lyrics with groovy allure. The pair dedicate most of their lyrics to singing their lovers’ praises, “Baby girl your body is a banger”, confident that they can secure a hit song by merely singing about their beauty.

Asides Skiibii’s lyrics, “To ba ri mi ninu Bentley/ Mo mope o fe ya selfie. When you see me in a Bentley/ I know you’d want to take a selfie”, the singers’ superstar status is hardly acknowledged as they remained focused on celebrating their muses. Though it’s still too soon to call “Banger” a hit song, it shows Skiibii at his finest and proves that we’d be talking about him for some time to come. With vulnerable yet heroic lyrics like “Let me be your sugar dad”, “Banger” is the sort of song that lingers with listeners and prompts you to think wistfully about your crush.

ICYMI: FRESH MEAT: The best new artists this month (May)

0000
Previous Article How the music in ‘Living In Bondage: Breaking Free’ aids the storytelling