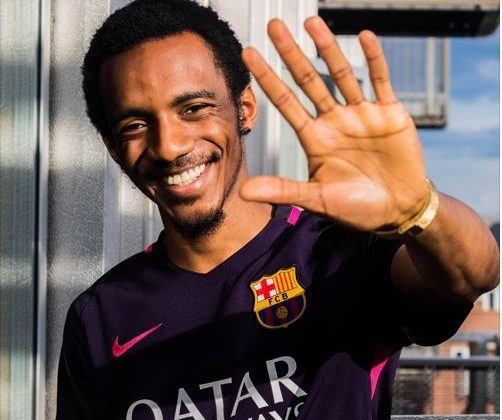 Fasina teams up with Higo for “5 Star”, a meta afropop experiment

The first time many Nigerians heard of British Nigerian Afropop singer was on Dj Femo’s debut single “Adara”. His unique sound, a mash of sung/spoken lyrics delivered with a characteristic drone, drew parallels with industry peers Yinka Bernie and industry pioneer Black Magic. That sound also  helped propel the Dj’s first project as a recording artist into an instant hit, garnering an astronomical 18,000 plays in a month . But Fasina is an industry all to himself, and after three singles and his star turn as a guest artist, he’s finally ready to introduce himself to the Nigerian music industry, capitalizing on the interest the ‘New Age’ is garnering.

Criminally underrated producer Higo comes on board to produce “5 Star”, Fasina’s new single. He brings his spin on the very British understated production, that has made Afropop more marketable to international audience, creating a simple harp riff, cleverly sandwiching claps between 808 percussions and shredding a synth guitar melody through a synthesizer to give it some body. It’s an enviable set up on which Fasina vibes, creating the most meta interpretation of the Afropop aesthetic, exploring abstract concepts of love and camaraderie between the singer, his love interest and his crew using inane imagery. A song built around ‘5 Star’, an ambiguous metaphor that could either refer to the kitchenware brand of the same name famous in the 90’s or the rating system used by every start up from Uber to Jumia. You’re never quite sure exactly what he means, but that’s the point, there’s enough ambiguity for you to take the song and interpret its themes in your way.

5 Star is the first feeler for a major project from the singer, and it has us stoked.