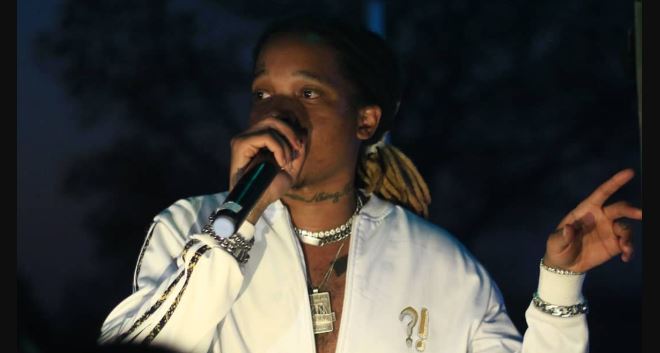 When the Kendrick Lamar-curated soundtrack for “Black Panther” arrived in early 2018, the major criticism levelled against the otherwise stellar compilation, was the lack of extensive representation for African artists on the project. For a film set in a pan-African Utopia, the expectation was that the biggest and most talented artists on the continent will be front and centre of the soundtrack, but only a handful of south African artists were featured, and to their credit, all of them justified their presence with standout appearances.

South African rapper Saudi was one of the artists on the “Black Panther” soundtrack, appearing alongside Kendrick, ScHoolboy Q and 2 Chainz on the explosive banger, “X”. Switching between metaphor-driven raps and lines sung in IsiZulu, Saudi’s verse on “X” was a potent introduction to unfamiliar listeners, leaving a positive mark on the biggest look in his career till date. Since then, though, Saudi has been relatively quiet on new music, sometimes surfacing for the occasional feature.

Finally breaking the silence, Saudi’s newly released mixtape, ‘The Drip’s Leak’, is his first project since his brilliant 2017 debut album, ‘D.R.U.G.S Inc’, and it builds on the foundation of his previous work, both thematically and artistically. Released without any pre-promotion, the new tape is meant to serve as the first in the series of mixtapes leading up to his sophomore album, tentatively titled ‘Japan Four’, but it also stands on its own as a body of work that deserves the same attention as a ‘proper LP’.

In the post-digital era mixtapes are more or less the same as albums, it’s the stakes attached to the project by the artist that serves a major separating factor. With its surprise release and the occasionally crude mixing, Saudi might be selling ‘The Drip’s Leak’ a little too short, considering the amount of introspective material loaded into its thirteen tracks. On his debut LP, Saudi’s awareness of himself and his environment was a key element that pushed the album forward. This time around, that awareness is more acute, giving us a portrait of the rapper as a deeply flawed person with intentions to do better.

Coming from a financially poor background, Saudi’s current affluence is a well-worn theme in his catalogue, but it is always grounded by the type of previous experiences that makes his music instantly affecting. On “The Pieces of the Heart of a Thug”, he raps, “I keep 5000 in 20s in that brown paper bag/as a reminder I never had jack”, leading to one of the more striking moments in a project with many. Multiple times on the project, he raps about his motivation to keep getting money, but it’s with the knowledge that a brimming bank account will only lessen the pain from his past, not totally alleviate the trauma.

Entangled in this search for peace and a better self, amidst all his monetary wealth, are complicated relationships with friends and family—he’s quite spiteful to his “deadbeat dad”. On the first verse of the intro track, “Hug Me the Money”, he raps about letting go of a disloyal friend, exuding pain and vindictiveness in his voice. The entire song, which is basically him pledging an allegiance to money since it won’t backstab you, pushes the envelope toward solipsism, but he reins it in by owning up to his own flaws and admitting the importance of having people around. He goes in on two-faced friends again on the second verse of “Uself”, but that’s after he acknowledges that all he needs is enough money to take care of his family and close friends.

In a similar vein, Saudi shares his difficulties with romantic relationships on wax, even tying them back to his imperfections. On “Pink Sheben”, one of the album’s best tracks, Saudi sings about the difficulty of leaving a torturous relationship, using it as a sly admission of how hard it can be (for him) to let go of someone that has hurt you. Elsewhere, he pleads with a lover to continue giving him numerous chances despite his constant shortcomings on “Please Understand”, while on the low-key funny “Psych”, he breaks up with a lady in a manner so petty even Future would be jealous of.

Continuing the trend of his previous album, Saudi goes the majority of ‘The Drip Leak’ on his own, and it serves him best since there’s barely any guests waiting to cut in on his thoughts. In this way, his song-writing shines over a consistently stellar pack of immersive trap beats. Only two songs on the project are graced by features, and they are from South African rappers Emtee, Ranks and Sims, all fellow members of the collective, African Trap movement. Both songs, the hedonistic “Rockstar” and the celebratory cutthroat on “Been Through It”, are easily accessible, carried along the type of easy chemistry that might be difficult to achieve on the more personal cuts.

‘The Drip’s Leak’ closes out in challenging fashion with “The Need Way”, a 22-minute track on which Saudi piles on relentlessly about any and everything. Between mouthing off at inferior rappers, giving personalized insights on capitalism and admitting his misogyny, Saudi delivers each line promptly and with precision, enunciating in his words in a way that demands that listeners keep up with him. To be honest, “The Need Way” is longer than it needs to be, but it’s also captivating definition of Saudi as someone who’s more than a sum of his parts. Sure, his music is a tool for exposing the worst parts of his situations—as a way of evolving into a better version of himself—but altogether, it is whatever he determines it to be.

Listen to ‘The Drip’s Leak’ below.

ICYMI: OLAMIDE RETURNS TO HARDCORE RAP WITH HIS LATEST ALBUM, ‘999’