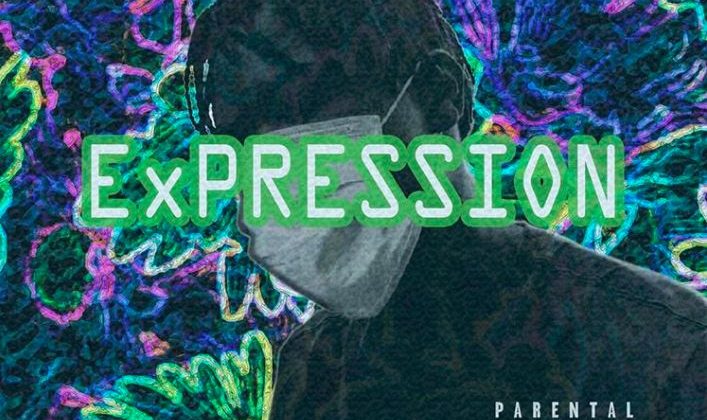 In the shifting state of music consumption around the world, hip-hop in Nigeria has stayed consistent and predictable. While young emcees chased crowd pleasing punchlines, established rappers jumped on the Afropop bandwagon for clout. It seemed like we had found the winning formula with exceptional projects filled with self-aware introspection. But the formula was hindering the genre from evolving as experimental projects merely meant carefully curated conceptual explorations with barely any attention to form. Perhaps this is why Djaji Prime’s project debut, ‘ExPRESSION’, feels particularly bold, pushing hip-hop to new places with his open-eared production and a staggering range of influences.

“Flight Mode” off PayBac’s ‘Autopilot’ album familiarized hip-hop fans with Djaji’s sing-rap flow. But beyond being in-tune with the trendy trap and hip-hop zeitgeist, his melodic delivery, varying sonic textures and descriptive storytelling finds the perfect match in Charlie X’s piano-driven production on this project. Thanks to the producer’s groovy fusion of classic 90’s hip-hop inspired beats and some oriental harmonies, ‘ExPRESSION’ is intrinsically a feel-good project despite Djaji’s brooding demeanor through the 12-track mixtape.

#Happy Sunday from me & @charlie_xtreme😇. My new #mixtape #ExPRESSION⚡ is OUT NOW🎉! Link in bio🌟🌟🌟 🚨Please be sure to check it out🚨 #wearenigeriancreatives #nigerianfashion #nigerianhiphop #mask #fashion #music

Opening track, “NO COMPETITION” has a bouncy trap beat with hypeman ad-libs that conjure images of strippers dancing on a pole, but Djaji’s raspy auto-tune vocals pull listeners into a dark landscape filled with haters and demons feasting on his heart. Though the track highlight the budding talent’s confidence, he’s self-conscious and wears his cold heart on his sleeves, rapping “Kill it in the Booth/ Bury Beats with the Bars”. The beat for “POT” is more somber as Charlie X seems to romanticizes Djaji’s grim tales of being no-fly listed with angelic vocal samples. Though the track establishes Djaji’s international exposure, traveling around the atlas seemingly dealing drugs, his reference to D’Banj’s “African Michael Jackson” is a heartwarming appeal to Nigerian music lovers without being pretentious.

The brilliant chemistry Charlie X and Djaji share on ‘ExPRESSION’ is highlighted on “HOTTEST IN THE STREETS” where Djaji’s sing-rap flow is meet halfway by oriental influenced percussion, synths and 808s. The catchy fusion of harmonies hype up Djaji’s confidence as his melodies are more mesmerizing and his bars hit harder; “Man I Know I’m Chosen, That’s Why I Flow With Purpose”. The mixtape’s title-track however finds him rapping with so much vigor, he slips into his native Hausa dialect while featured artist, Ria Sean, delivers a soothing hook as if to pacify Djaji’s gritty description of his life as an artist living in Lagos. His description is helped along by other featured artists, Boogey on “MUMU” and ODC on “SCRAP” and PayBac on “LAST NIGHT, I SHOT MY HEART” and Mon Lee on “JABI LAKE VIBE”.

Though each featured artist brings their own unique sound and style, ‘ExPRESSION’ remains cohesive as they help add a glossy, stylish, and sophisticated elegance to Djaji’s candid depiction of his edgy lifestyle. PayBac assisted “LAST NIGHT, I SHOT MY HEART” sets up Djaji to channel his angst to rock territories, while his pent-up rage didn’t reach its climax till ODC’s aggressive hook on “SCRAP”, the 8th track on the project. The last track on the tape, “THE DAMNED” offers no resolution from the shadowy lifestyle of his paranoid mind as he chants “Fuck The Struggle” with his voice compressed through a sleepy singsong delivery. ‘ExPRESSION’ is a welcome jolt for hip-hop in Nigeria with Djaji’s attention to several expressions beyond just rhymes and storytelling. His cold and absorbing narrative is delivered in a melodious tone that fits right into play dance-club playlists.

You can stream ‘ExPRESSION’ below.

ICYMI: Listen to Charlie X, PayBac and ODC team up for “Gas”

Next Article Endia is back with another breezy wine-friendly bop