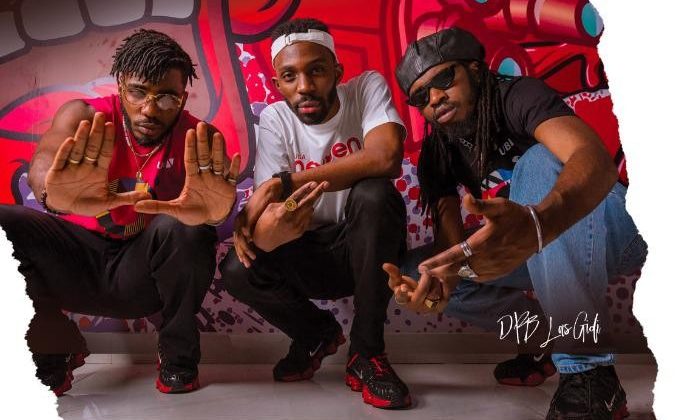 DRB are set to release a new studio album, ‘Pioneers’ very soon, and the project promises to be the crowning jewel on their preeminence in the alté community. The trio; BOJ, Fresh L and Teezee have grown a reputation for their eclectic and vibrant collage of sonic influences, feeding on the euphoric energy of their home city, Lagos. Their upcoming album expands the musical universe which gained them acclaim since they started out in 2007, with an ensemble of elite guest verses guaranteeing that the project will make a mark this year.

The group has continued to grow steadily, and blazing the trail in various creative and entrepreneurial ventures from partnering with Jameson to helping integrate the whiskey in Lagos nightlife to starting up various media companies to push their message even further. Their latest business endeavour sees them partnering with UBA as part of the bank’s NextGen campaign, leveraging DRB’s influence on a younger generation to help provide convenient banking services for teenagers.

According to UBA’s head of marketing, Dupe Olusola  “As the face of the Alté subculture in Nigeria, DRB LasGidi is a perfect representation of the NextGen lifestyle of self-confidence and uniqueness”.

The NextGen Account is the bank’s inventive method of giving students autonomy over their own finances from a young age, so they can do more – especially at this critical stage of their lives with an account that comes free of fees.The new Account opens students and NYSC members up to several benefits and opportunities, including multiple digital channels that makes banking just another fun thing to do on their mobile phones.

Harnessing their individuality and maximizing their talents through smart business ventures, DRB has built the leverage necessary to maintain a sustainable career in Nigeria’s fast-changing music terrain. The path travelled by pioneers is often treacherous, and at times vague, however the continued success of groups like DRB, gives hope to the next generation to set even higher standards and achieve bigger dreams.

Speaking on behalf of the group, Teezee sat down with us for a brief conversation on improving financial literacy for the next generation:

NATIVE: What saving tips do you have for young Nigerians, and how can we teach better financial literacy?

I would say any money you get, make sure to try and save at least 10% of it. Once you get into the habit of saving, it becomes something that is part of your life. The best way to teach financial literacy is to making it more fun, and accessible. If it’s easier to understand and access, young people will be more likely to be interested in adopting the lifestyle.

NATIVE: What financial goals did you set for yourselves last year, were you able to meet them?

Teezee: I set some financial goals for myself, it’s always good to have a target that some may deem unrealistic, so when you fall short you know you’ve still done well. But sometimes, you tend to want to exceed your expectations. I set pretty  high goals for myself last year, which I would’ve met if not for some unforeseen events.

NATIVE: What’s the best investment you’ve made so far?

Teezee: Investing in The NATIVE. Not even just financially but seeing the shift in the culture for everyone involved from the media angle to the actual music/musicians is amazing.

NATIVE: What do you hope to achieve with your partnership with UBA?

Teezee: We hope to reach as many young people as possible, and help them in understanding new ways of banking and making banking easier and accessible to the younger generation.

NATIVE: What is the best piece of advise you have received from someone younger than yourself?

Teezee: Always be yourself at all times.

NATIVE: What inspires you about the next generation?


ICYMI: DRB and Olamide show us how Lagos parties in their video for “Shomo”