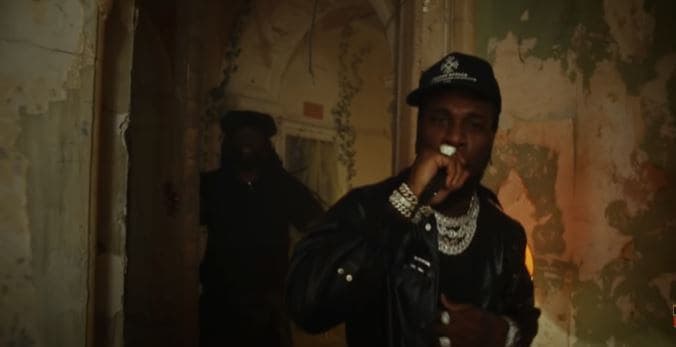 One of the truly remarkable aspects of the #EndSARS protests, and the ongoing movement for a safer and saner Nigeria, is the emphasis on decentralisation. The common rhetoric of the past few weeks it that every concerned Nigerian youth is a leader of the demonstrations, and that includes celebrity figures who would have somehow become arrowheads in these sort of moments, due to their fame.

During these recent, tumultuous days, many celebrities have opted to use their platforms in amplifying the agitations against police brutality, rightly joining in the fight for change, rather than leading. Although conspicuously radio silent for the first few days of protests, Burna Boy has been one of several prominent Nigerian artists playing their part in the fight for change which the Nigerian youth populace have been so passionately pushing for.

Towards the end of the first week of agitations, the first couple of #EndSARS billboards were spotted in Lagos and other parts of the country, which were apparently sponsored by the Nigerian singer. During that period, Burna Boy also put out a statement showing his solidarity with the protests and announcing that he had set up Project Protect, an initiative to help in providing financial, medical and legal resources during and after the demonstrations. He’s also remained vocal on Twitter, sharing reactions to real time happenings, even briefly sharing an extended snippet of a tribute song to peaceful protesters killed by Nigerian soldiers on October 20, 2020.

Continuing to use his voice of activism, yesterday, at the 15th edition of the BET hip-hop awards, Burna Boy dedicated his performance to all victims of police brutality. Aired during the ceremony last night, Burna performed the raging socio-political cut, “Monsters You Made”, a standout track off his last studio album, ‘Twice As Tall’. The Chris Martin-assisted song received a symbolic music video soon after the album release, and Burna heavily interpolates the rebel universe of the video into the set of his performance.

Backed by his band, the Outsiders, with Chris Martin singing his parts remotely, Burna delivers his impassioned set while a montage of real life clippings showing police brutality on peaceful protesters – from Selma in 1965 to Lagos in 2020 – is projected unto a large screen. The set also includes extras dressed in the same vein as the music video of “Monsters You Made”. As is customary during his live shows, Burna’s vocals are crisp and clear, painfully so this time around, due to the poignant nature of his lyrics and how much they relate to current happenings.

As the #EndSARS protests have been sustained, the Nigerian government are resorting to gas-lighting the Nigerian youth, from demanding an end to protests, even though we’ve not seen concrete steps towards implementation; to deploying thugs against peaceful protesters; to pinning the destruction of properties on demonstrators who have always ensured to clean up after themselves. Instead of actually paying attention to the demands of protesters, the list of counter-responses has been long, painting us out to be unreasonable – or, in other words, monsters.

On the first verse of “Monsters You Made”, Burna mirrors the attitude of government towards citizens who dare ask for change, after long years of enduring unideal conditions. You could say the song is prescient, considering what is going on, but it fits quite easily, mainly because Nigeria’s governmental challenges haven’t really evolved in our 60 year, and a lot of activism-driven songs remain relevant till date. By honouring victims of police brutality in Nigeria – Tiamiyu Kazeem, Kolade Johnson, amongst others – Burna’s BET hip-hop awards performance is a resounding reminder of the urgency with which change needs to happen.

Dennis is a staff writer at the NATIVE. Please share any useful resources for the #EndSARS movement with me @dennisadepeter

ICYMI: THE FIGHT TO #ENDSARS IS REALLY A FIGHT TO FIX THE NIGERIAN SYSTEM