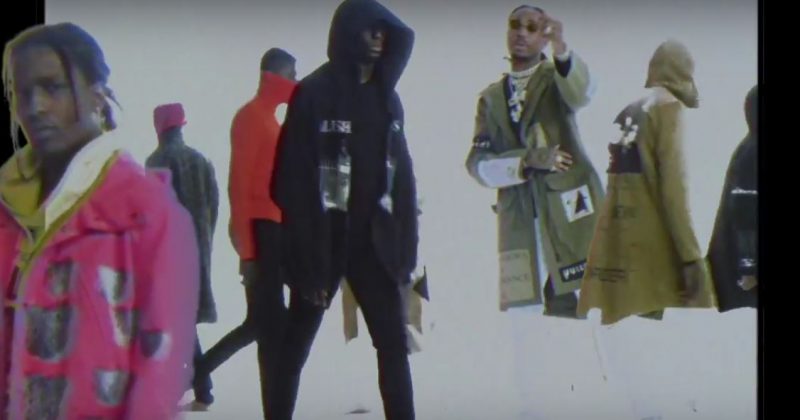 6 videos you gotta to see this weekend

Music videos allow artists appeal to their fans not just with their vocal talents but also through their carefully orchestrated storylines, choreography and personal aesthetic. Though dancing artists may no longer be as pop as they once were, artists are still leaning on aesthetics videos and the A$AP Mob’s new video for “RAF” is as eccentric as they come. The video features A$AP Rocky, Playboi Carti & Quavo for a star-studded fashion show where they adorn an assortment of Raf Simons clothing while complete with VHS-inspired effects and an all-white background.

Wizkid and Davido may have gotten carried away and taken their rivalry to twitter, but we are glad they are finally back to competing with more maturity. While Wizkid’s latest release, Sounds From The Other Side is battling for international recognition with his American features, Davido has taken advantage of the African music scene. His feature on Zimbabwean singer, Jah Prayzah’s “My Lilly” is only one of the two African collaborations he has featured on in the space of a week. The mellow-dramatic video for “My Lilly” is shot in South Africa and directed by Godfather Productions who follows the song’s romantic narrative for a script that sees Davido get on his knees offering his love interest a big shiny rock.

Jay Z and Kanye West seem to have gone from super group to rivals. Though most of the talk about the beef has been largely speculative, “Britain’s Channel 4 network” is airing a documentary that will feature “unseen footage and unheard testimonies” . DJ Clark Kent, the legendary producer who has worked with Hov since his debut album is heard commenting in the preview, “One is a New York street dude, The other dude is a mama’s boy from Chicago.” Plus longtime music journalist, Touré adds: “JAY-Z is very thoughtful about money. Kanye is spend-it-all, art-comes-first”.

One thing you quickly realize from Flavour’s style and music is that he’s as much a lover and as he is a fighter. His macho demeanor may appear to contrast his romantic themes but they have only worked to make him a bigger artist than most. This Sesan directed video for “Sake Of Love” put that balance front and center as Flavour is shown fighting to defend a love interest. The fact that he is shown drinking just before smashing the head of his love interest’s ex might not be enough to appease the morally upright but then again, all is fair in love and war right?

Wizkid’s new album, Sounds From The Other Side has put him in the media a lot lately. His latest one is this interview session with Beats 1 Radio host, Ebro Darden where he discusses his album and why he’ll rather have called it a mixtape. He also admits to his sound not being entirely new despite what others might saying, “The Sound Is Really Not Changing/ It’s Only Just Connecting” describing how he fuses different sounds.

MTV’s Wild ‘N Out is back and this time, Nick Cannon and the gang are hosting New Edition. As well as everything else that has made the show a must-see—lightning fast comedic improv, head-to-head diss battling and of course, their famous rap battles where guests always manage to find new ways to remind Nick Cannon about his ex, Mariah Carey.

Next Article “Bend It” this weekend with Maleek Berry