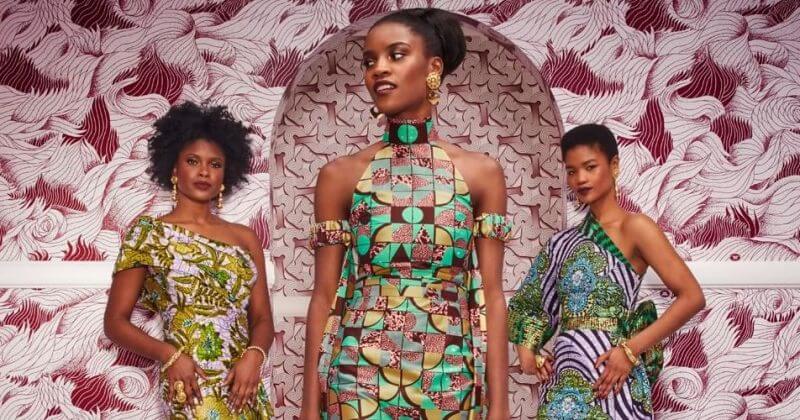 2020 has been the year when masks have come off in the fashion universe, revealing the extent of racism and misogyny in one of the world’s most lucrative industries. The French brand Jacquemus, for example, was recently dragged for its nearly all-white team while relying on Black models. Off-White and Louis Vuitton’s Virgil Abloh has become a meme after his $50 donation to a Miami bail fund, and is heavily criticised for photos that showed the whiteness of his creative team, and his retained friendship to alleged serial rapist Ian Connor. Fashion writer Louis Paul Pisano also caused an uproar, when he posted pictures revealing Milan industry elite in blackface and dressed as slaves.

Brands with a strong presence in Africa have for the most part escaped increased scrutiny, but a few dissenting voices have challenged the neo-colonial power dynamics perpetuated by European companies operating within African fashion industries. Bolaji Animashaun was scrolling on Instagram from her home in Lagos, Nigeria, when she came across a post made by Vlisco, a Dutch company that is the most well-known producer of the wax cloth prints extremely popular across Africa. The post, which has since been deleted, said that the company was supporting Black women. Bolaji, a fashion consultant and director of Lagos Fashion Awards, who thought the post was performative, was incensed and began asking questions in the comments.

Vlisco’s boilerplate statements about Black Lives Matter in reaction to those questions prompted her to make her own posts (some now deleted), and in the comments, a number of African industry professionals spoke about their own negative experiences with the company and demanded more information about the company’s racial make-up, wage gaps between its white and African employees, and its commitment to the fashion industry in Africa.

“The biggest thing for me right now is the manipulation of creativity and labor,” Animashaun said. “There’s no [executive level] representation of those who wear the clothes. The clothes are consumed by 95% Africans. Most of the work is taken from us, it’s been inspired by what we do. Are Black people not good enough for you to be an executive, a brand director, or part of the creative team?”

Vlisco’s history, and that of its founders, the van Vlissingen family, is closely associated with Dutch colonialism. “They were trading textiles, and textiles were actual currency in the slave trade,” said Catherine McKinley, historian and author of Indigo: In search of the color that seduced the world. Though the actual van Vlissingen family hasn’t been associated with Vlisco – a contraction of “Vlissingen” and “Company” –  since the late 1980s, according to Frans van Rood, former head of design and development at the company, “The van Vlissingen family was based in Amsterdam and consisted of bankers and traders. One branch of this family got into coal trade and developed into a conglomerate”. Today, the van Vlissingens are one of the richest families in the Netherlands, and the most well-known family member, John Fentener van Vlissingen, is worth $2.1 billion.

According to the company website, in 1852 then-owner Pieter Fentener van Vlissingen visited his uncle’s Javanese sugar plantation and came across traditional batik cloth, which he then brought back to the Netherlands to mass-produce cheaply. Although the Netherlands had abolished slavery by that point, it was still legal in Java until 1860, so it’s likely that enslaved people were labouring on the van Vlissingen sugar plantation. Then, “around the turn of the 20th century, Vlisco shifted its attention to Africa,” says Frans van Rood. From there, a market for wax prints developed that is profitable to this day.

Testimonies from current and former employees of Vlisco show a company that is operating under a colonial-era organisation highly resistant to growing global demands that insist on tearing racist structures down.

There are relatively few fashion brands with annual revenue upwards of $100 million that cater primarily to African consumers on the continent, most focus instead on European, American and Asian markets. However, as local fashion industries in Lagos, Accra, Abidjan, Dakar and other West African cities began to boom, the Dutch brand started facing increasing competition alongside demands from consumers for the company to invest in African manufacturing. According to a current employee, who spoke to us under the condition of anonymity, almost all of Vlisco’s creative staff at the Netherlands headquarters are white – only one of the “14 Creative Designers who create the patterns that get printed on fabric” is Black, the employee stated.

The way in which Vlisco has been able to sustain their profit and endure the competitive African market for such a long time, is in part because the company has been able to capitalise on the cheaper cost of production on the African continent and put an African face on their brand through their factories in Ghana and Ivory Coast. On the surface, these factories seem to be a sign that Vlisco is supporting African manufacturing industries, but the reality is exploitative, as Vlisco overshadows African brands with fewer resources, and ultimately, their interest in Africa is not reflected in the overwhelmingly white make-up of their creative and executive staff, largely hidden from view.

Fortifying their influence in Africa in 2017, with the inception of its ready-to-wear label, Vlisco & Co., Vlisco CEO, David Suddens is reportedly the man responsible for steering Vlisco into financial safety after a period of losses stemming mainly from Chinese exporters who provided wax cloths at a lower cost than Vlisco and its subsidiaries Ghana Textiles Printing, Uniwax, and Woodin. Vlisco & Co. – targeting a higher-income consumer both in Africa and the Diaspora – was a part of the Suddens-led turnaround.

Since the launch of Vlisco & Co., there has been a concerted effort to court and collaborate with young African creatives, a strategy which has so far paid off. Although it’s not clear if the division is profitable itself, it has changed the company’s brand image and orientation, lending much-needed credibility to its name and generating interest from internationally-known brands and public figures. In 2019, Vlisco collaborated with Dior on a print collection, while Beyoncé has worn their wax prints on more than one occasion.

But even the launch of a division meant to transform Vlisco’s brand from an out-of-touch white company that takes advantage of its African consumers was marred by that very dynamic. According to a former employee and consultant who asked not to be named for fear of retribution from the company, Vlisco & Co. started from the ideas and research of an African woman who was never properly compensated for her work, and was excluded from the company after its successful launch.

“Vlisco Netherlands was never interested in working with African people,” the ex-employee said. “They had so many opportunities to get it right. If they’re saying they want to work with Africans, they’re lying.”

In addition to their racial subjugation of African people, Vlisco has actively participated in racist celebrations at home in the Netherlands. From an undisclosed date until 2019, the company sponsored the Sinterklaas celebration in Helmond, Netherlands, where their headquarters are.

Sinterklaas celebrations in the Netherlands are notorious for the blackface character Zwarte Piet, or “Black Pete,” a “mischievous helper-slave” to St. Nicholas that is an integral part of the celebrations’ “three-week-long minstrel show,” in the words of Washington Post opinion editor Karen Attiah. Zwarte Piet is widely known as a racist caricature, despite Dutch protests to the contrary.

On September 30, 2019, Vlisco’s CEO David Suddens sent an internal memo (which you can find below) to Vlisco staff announcing that “Vlisco is fully aware of the competing arguments around the history and meaning of Zwarte Piet” but “on balance, however, it considers that depicting black people in subservient roles is not appropriate.” Nowhere in the memo does it say the company disapproves of blackface or the racist tradition.

The current employee who spoke to us on condition of anonymity said that when Suddens reluctantly stopped sponsoring the blackface ritual, he decided not to release a public statement because, he apparently said, “We’re going to please three people online and piss off 500 workers in Helmond,” speaking about Vlisco’s HQ workforce. They went on to reveal that most white Dutch employees of Vlisco support the blackface ritual and oppose efforts to make public statements condemning it. “It means that by saying that we condemn Zwarte Piet, that 500 of our white Dutch workers will be pissed at him, that he will look bad for folding under pressure,” the employee said. Suddens “is constantly discrediting the feedback that mainly the Diaspora and Nigeria are giving him. He just thinks it’s ‘woke culture’ and he won’t respond to it,” the employee explained.

When asked about the Sinterklaas sponsorship and accusations of racism against Vlisco, a spokesperson for the company said, “unfortunately our CEO is travelling at this moment in time. He is not available for comment.” Follow-up emails were ignored.

Many brands have condemned racism within the industry after public pressure, only to have their statements’ performativity revealed through other acts of discrimination and whitewashing. The French luxury brand Celine, for example, declared on Instagram that it “stands against all forms of discrimination, oppression and racism,” only to be called out in the comments by stylist Jason Bolden, who wrote that Celine doesn’t dress Black celebrities “unless they have a white stylist.”

As the internet age has given us a broader lens with which to peak in and scrutinise brands for their discriminatory practices, we are seeing an increasing number of virtue signalling actions that, on the surface, present as positive steps forward, but are revealed to be ploys to appease the public, so that these companies can retain their existing framework imbued with racial and gendered injustices. If brands like Celine or Jacquemus or a company like Vlisco want to prove that they deserve a place in the newly emerging, egalitarian and just world, they’re going to have to do more than share tokens of their support. They’re going to have to fight the racial battle right beside the rest of us.

Original memo from the Vlisco CEO informing employees that the company will no longer be sponsoring Sinterklaas: 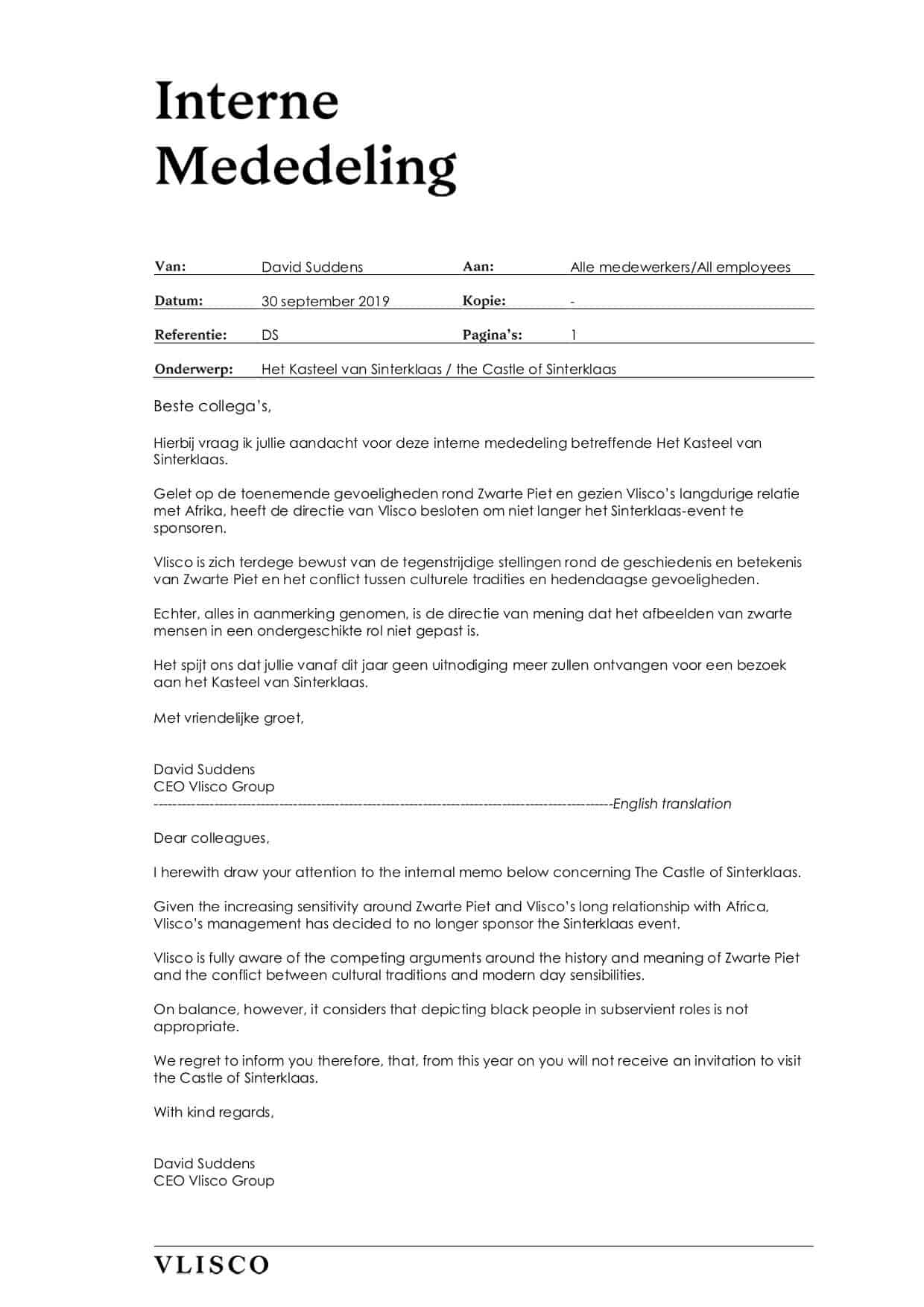 Next Article #ZimbabweanLivesMatter: corruption in Africa amidst the COVID-19 outbreak