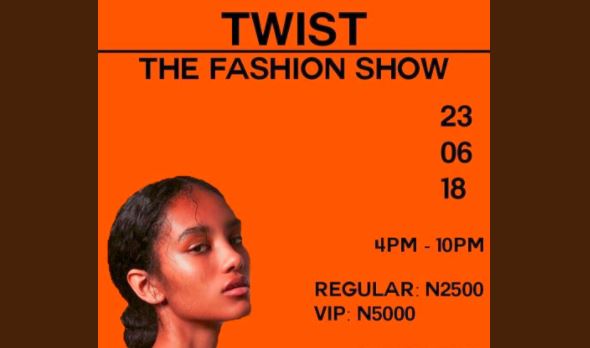 The Twist Fashion Show invites you to their debut event this summer. The show’s founders, Alina Abdullahi, Adanma Nwankwo and Etopima Umanah are fresh out of secondary school, and they started this project to create a platform for self-expression for visual artists around their age.

The founders also plan to use the project and their platform for active advocacy in support of rape and domestic violence victims. 50% of their proceeds from their debut show will go to Mirabel Sexual Assault and Referral Centre For Rape Victims, one of the few sexual assault centres in Lagos. The support is important as the NGO almost closed down last year due to lack of funding.

The twist fashionshow in a nutshell pic.twitter.com/PTcX1nI7fU

The Twist Fashion Show will be a 2-part show held at the venue in Ikeja on the 23rd of June 2018 from 4pm to 10 pm. First a fashion show, then an art exhibition. We spoke to Etopima Umanah, one of the founders of The Twist Fashion to get a better understanding of the motive behind the Fashion show.

“Alright so it’s a fashion show and exhibition organized for teenagers by teenagers cause that’s our major target audience. It’s also involved in charity, particularly for rape and sexual assault victims because they are often ignored and marginalized group of people—both by society and government. And speaking from experience, it really hurts when no one believes you or it’s just so trivialized that speaking up about it is discouraged.

We’re donating a significant amount of the proceeds to the Mirabel Centre for Rape and assault victims at the end of the whole thing. It nearly got shut down last year in February due to a lack of funding, so yeah, we don’t want anything that horrid to ever happen. The Twist Fashion Show is also a youth empowerment event in the sense that all the art, fashion etc presented during the event will be delivered and produced by teenagers.

We hope to demonstrate the responsibility of the adolescent as well as our commitment to society through the efficiency of the organization because those are things adults often consider us as lacking.”

See the flyer, showing the dates and venue entry fees for  The Twist Fashion Show below.

Development posters out now. Like what you see? pic.twitter.com/E9kMiRRwL0

0200
Previous Article A Conversation with Dare Olaitan Before the Debut Screening of His Movie, “Ojukokoro” in New York