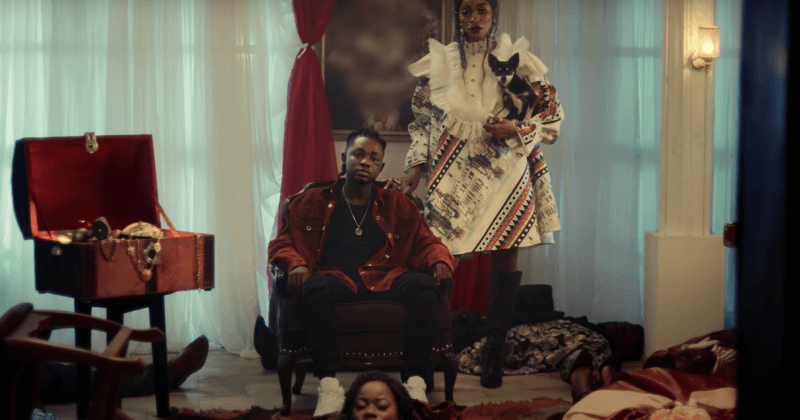 Turntable top 50: Omah Lay climbs to the top of the charts

Omah Lay has climbed to the top of the Turntable charts with “Godly”, one of the standout tracks from his newly released EP, ‘What Have We Done’. Though it debuted last week at #3 behind Davido’s “The Best” and Olamide’s “Infinity”, he has now peaked at the top of the Turntable charts which incorporates data from radio airplay, streaming, and TV airplay in Nigeria. Even though “Godly” doesn’t is not an official single, clearly it’s a favourite, as it has reached the top without television backing, a feat that only Wizkid and Burna Boy’s “Ginger”, Davido and Nicki Minaj’s “Holy Ground” and Davido and Mayorkun’s “The Best” have accomplished in the 5-week history of the chart.

In the past week, “Godly” racked up 2.03 million streams and 42.14 million radio airplay audience impressions to put the Port Harcourt native on top of the Airplay Chart and Top Streaming Chart. He had previously featured on the Top Streaming Chart with his guest feature on DJ Tunez’s “PAMI” and Olamide’s “Infinity”, and now with “Godly” serving as his 4th #1 feature on the TTC, he joins Davido as the artists with the most #1s in the chart’s history.

Omah Lay also matches Davido’s record for featuring on the top 2 spots of the TTC as Olamide’s “Infinity” featuring Omah Lay retains its #2 position from last week. “Infinity” off Olamide’s ‘Carpe Diem’ has now spent 3 weeks in the runner-up position after it debuted at #2 on the chart released on the 16th of November. However, it moved down 3 spots when Davido debuted ‘A Better Time’ and dominated the top 4 positions on the chart. “Infinity” drew 1.19 million streams and tallied 32.15 million radio airplay audience impressions, leaving Davido’s “The Best”, featuring Mayorkun backtracking to #3 after topping last week’s chart. “The Best” only garnered 1.59 million streams though it tallied 44.82 million radio airplay audience impressions to lead the Radio Chart for a second week. 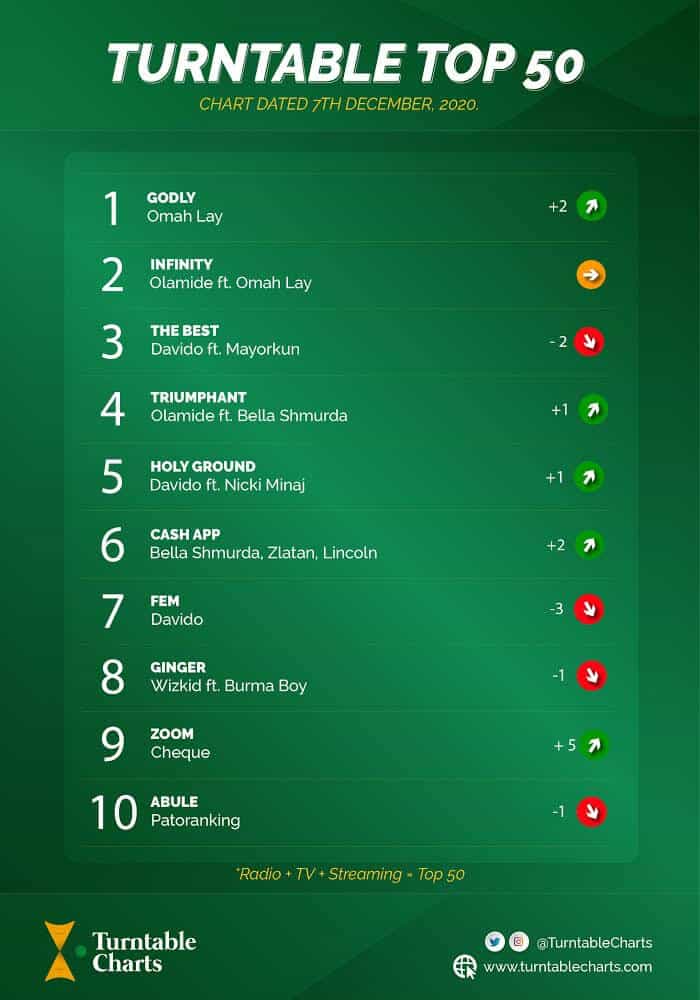 Olamide’s Bella Shmurda-assisted track, “Triumphant” and Davido’s “Holy Ground”, featuring Nicki Minaj both climbed one spot each from their positions on last week’s chart to occupy the 4th and 5th spot respectively this week. Bella Shmurda, Zlatan and Lincoln’s “Cash App” also climbed up to reach a new peak at #6 as it continues to climb following Bella Smurda’s recent string of small shows in Dubai and some places in Africa.

Davido’s former chart-topping single, “Fem”, however for the first time since it debuted has been out of the top 5. The song spent a record 9 consecutive weeks atop the Top Airplay Charts and has now slipped from last week’s #4 position to occupy the #7 position on this week’s chart. Wizkid’s former #1, “Ginger”, featuring Burna Boy also dropped one position from #7 to #8 while Cheque returns to the Top 10 with “Zoom”, climbing from #14 to #9 as Patoranking’s “Abule” goes down from the 9# position it held last week to its current place at #10.

Outside the top 10, Naira Marley’s prodigy, Zinoleesky made his debut on the TTC charts with his new single, “Kilofeshe” debuting at #22 while Timaya’s “Gra Gra” debuted at #35. Zinoleesky just put out the official video for “Kilofeshe” so we expect that it will continue to climb and perhaps even reach the top 10 next week.

Next Article Songs of the Day: new music from Stonebwoy, Falz, Tomi Agape and more