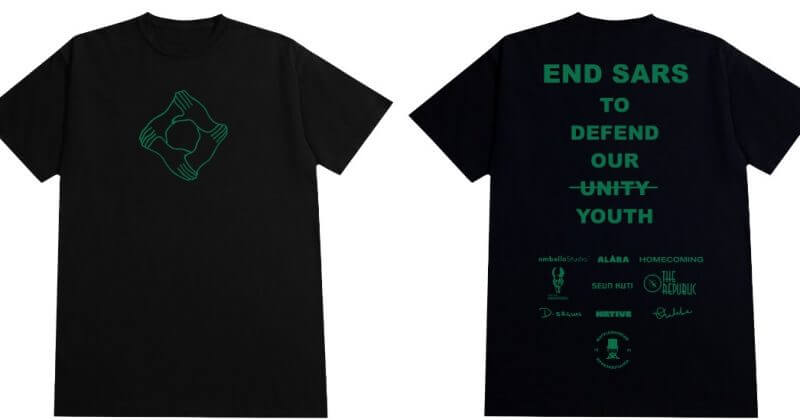 It’s been over a week of peacefully protesting the rogue unit of the Nigerian Police Force, SARS, and the wider injustices committed by the Nigerian government on her people. Thanks to organisations like the Feminist Coalition (FC), protesters who have been injured, attacked, and unlawfully detained have been tended to and safely returned to their families. The FC has also been able to galvanise more Nigerian youths to attend protests around the country by providing private security, food, medical services, protest equipment and legal services to all protesters.

To support the fight against police brutality and raise more funds for the FC, some members of the creative community in Lagos including NM Bello Studio, Alara, Homecoming, The Lost Okoroshi, Seun Kuti, The Republic, Deborah Segun, NATIVE, Dennis Osadebe, and WAFFLESNCREAM have come together to design the DEFEND YOUTH TEE. Featuring an illustration by Deborah Segun, and sold exclusively on www.wafflesncream.com & www.wafflesncream.co.uk 100% of the proceeds from sales of the Tee will be donated to The Feminist Coalition, an organization fighting against injustice through peaceful protests, fundraising, and social media organization.

Tweet Tips On The #EndSARS & #EndSWAT Protests To @tamimak_

ICYMI: A detailed breakdown of the Feminist Coalition’s progress report

0000
Previous Article #EndSARS: Inside the sinister operations of Akwuzu SARS in Anambra State

Next Article Nigerian artist, King Mimz shares an account of her time in police custody