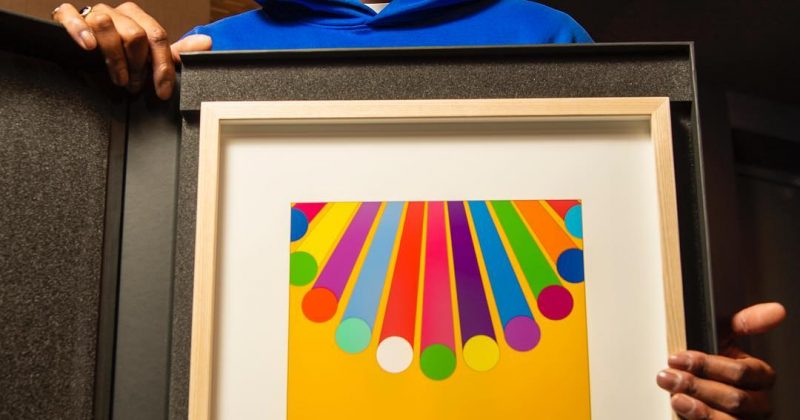 Yinka Ilori is reputed for telling contemporary stories with his traditional inspired designs and artworks. The Nigerian-British artist was recently commissioned to set up the temporary outdoor structure for Dulwich Picture Gallery during the London Festival of Architecture in June.

Often provocative and humorous, his works are inspired by Nigerian parables and the African fabrics that surrounded him while he grew up in Nigeria. But the London-based furniture artist has proven adept at expressing his traditional influences as designs that touch on various global themes that resonate with different audiences all over the world. He recently announced his collaboration with Universal Music to work on a commission for the BRIT Awards, expected to hold on the 20th of February. The music giant is partnering with the visual artist to make the award show more colourful.

💥💥💥💥💥💥💿📀💿🎼🎹 Super excited to announce my collaboration with Universal Music @umusicuk for the @brits Awards 2019💥💥💥💿💿💿💿💿💿💿💿💿💿 As part of the commission, I have created a special edition print titled ‘Love in a line’, which has be signed and will be gifted to each of Universal Music’s nominees. : I have also designed the exclusive invitation for the annual Universal Music BRITs after-party, #UmusicBRITs, which celebrates one of the most significant nights in the global music industry calendar. : My artwork will also be featured at the party itself where I will be creating an exciting art installation for all the guest to feel immersed. : ‘Love in a line’ is celebration of our multiculturalism and reminds us that being different is beautiful and okay, which is something I wanted to celebrate through the artwork.” : This collaboration means a lot and whole thing still feels crazy 😂 Thank you to @umusicuk @jonathanbadyal @claire.potgieter for trusting my vision and giving me the opportunity, honestly forever grateful 🌹🌹❤️#LoveinaLine photo by @carsten_windhorst 💫

Perhaps in response to the recent criticisms music award shows have been coming under, labels are stepping forwards, as regards celebrating their own artists. “Love in a Line”, a special edition print created by Yinka Ilori, would be gifted to the Universal Music nominees like Drake, Ariana Grande and Sam Smith. He also designed the exclusive invitation for the award show’s after-party and it’s expected to also feature as an installation at the after-party, which will be attended by a VIP crowd of artists, models, actors and influencers. While expressing his excitement for the opportunity to display his work at the BRIT Awards, he described the art saying, ““Love in a line” is celebration of our multiculturalism and reminds us that being different is beautiful and okay, which is something I wanted to celebrate through the artwork.”

Next Article Listen to AYAT and Efya’s romantic new single, “For You”