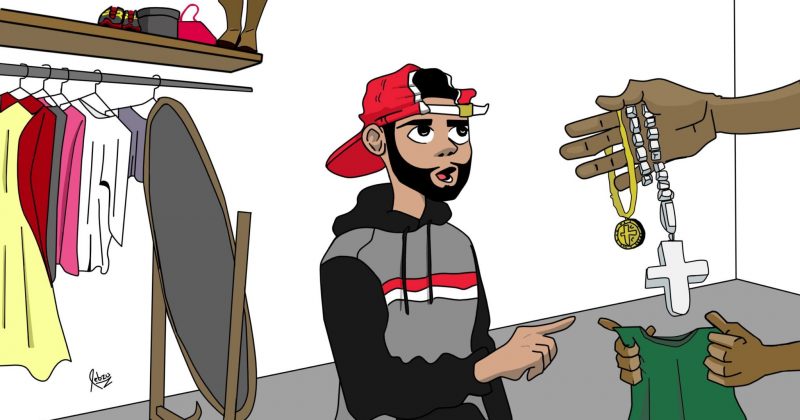 Let them wear Okrika: Thrifting as an exercise in self actualization

Okay, even I’ll admit, that headline is a bit of a misnomer. Thrifting, or the entire process of buying and wearing second hand clothing isn’t exactly a fringe activity. Except for a very privileged few, most Nigerians wear second hand clothing. Like epileptic power supply and taps that don’t run, Okrika is a inevitable part of Nigerian life.

As a child during the worst of the Abacha regime, I remember going with my elder sisters and my twin brother to Kasuwan Barchi in Kaduna to shop for the cold Harmattan months. As a largely sheltered child who had grown up on a steady diet of western cinema, I hungered to become like the children I watched on the Cadbury’s Breakfast show, always brightly dressed in headbands and cargo shorts, stripped polos and knee length varsity socks. Kaduna with its dusty streets and jellabiya clothed mallams always brought me careening back to earth. There seemed no way I could magically transport myself to a place where I could be assertive and land jokes and have parents who cared in a real way about my opinion so I did the next best thing, I reinvented myself by aping the fashion I saw them wear on TV.

Everything about the Harmattan market fascinated me. Unlike the rainy season market which was filled with ‘practical’ cotton sweat shirts and sensible corduroy shorts (Corduroy was huge in the 90’s), the Harmattan market was outlandish and overdone and unabashed about it. I loved the knitted hats and woollen socks, the downy sweaters and the Shearling lined boots that were stacked lazily on top of each other, the red stained beard of the seller bobbing as my sister rolled her eyes and threatened to leave if he didn’t lower the prices. My sisters fresh into Uni, were struck by the Baby Phat craze that had swept female hip-hop and R&B the year before and had grown incredibly skilled at sorting through the bales of ‘Grade One’ wrinkled clothing, their eyes gleaming with delight when they spotted the signature stylized cat. The occasional Dolce & Gabbana was a steal, Chanel you only got if you’d struck a deal with your ‘dealer’.

But what really made Okrika markets special for me was the options. I’d sort through the piles, choosing as many as I could manage, and together my sisters and I would thin out the herd, culling until we reached a compromise of stylish and practical and most important, within budget. Those clothes are long gone, but they remain immortalized in the photographs my mother insisted we take each year, silent markers of a story more complex than anyone who sees them now can imagine.

‘Okrika’ as it is called by Igbo traders who predominantly own that market in the South, and ‘Gwanjo’ as it is called in the North is a multi-billion naira industry that starts in Goodwill stores, Salvation Army Charities in the United States and Oxfam stores in the United Kingdom and ends up here in our predominant ‘Okrika’ markets like the one at Tejuosho in Lagos. The trip from newly made ASOS blouse to Okrika steal is a long and very interesting one, and also an story for another detailed article. For this one, we’ll stick to the ‘why’s.

Why does it matter that we thrift, if we already do?

Because the current rate at which we consume clothing is unsustainable. Globalization and industrialization has turned fashion from a specialized skill owned by a select few to an industry fed by thousands of machines. As more people invest in innovating the process of creating clothing, they create a system and a fashion cycle that produces clothes that meets no discernible demand. To ensure their investment pays off and their fancy machines do not lie dormant, the people behind your favorite fashion brands have created a fictitious cycle of demand, driven by fashion media, insisting that buying cyclical fashion trends is the best way to become trendy and desirable yourself. Clothes are made in anticipation of this fictitious demand, and the surplus of this fake demand is discarded and becomes ‘second hand’ clothing. This waste plus the stigma around second hand clothing means that the bulk of these discarded clothing end up in landfills where they are of no use to no one. This kind of waste (it runs in the hundreds of millions of dollars every year) is simply unsustainable.

Because there is a very damning human cost that is paid for cheap, fashionable clothing. In 2013, the Rana Plaza in Bangladesh collapsed, injuring 2600 people and killing 1,129 people, many of whom suffocated and starved to death over the course of four days. The vast majority of the people killed and injured in the Rana Plaza collapse were itinerant workers, women and girls who worked in unsanitary sweatshops making copies of high fashion brands for 30 – 50 dollars a month. Many of the women and girls working there were indentured (forced to work there either to pay off debts owed to debtors or the person who trafficked them from their homes). The Plaza they worked out of had none of the required safety measures and was holding far more people than its estimated. Rana Plaza is only one of hundreds these ‘sweatshops’ housng hundreds of modern slaves, their very lives at risk so we can wear a cheap but brand new pair of ‘trendy’ pants.

To bring it home; Because in Nigeria there is a stigma around thrifting, and the communities who thrift and embrace thrifted clothing as an aesthetic are often mocked for it. The Hausa ‘Aboki’ and the Igbo ‘Mgbeke’ have distinct dress aesthetics that have grown out of almost exclusively wearing ill-fitting okrika clothing without the context for why and where these okrika clothes originally made. The cultural intelligence and ingenuity with which the Mgbeke subculture in particular have managed to turn okrika into an art form has attracted photographers like Ruth Ossai and Nadine Ijewere who have both tried to capture the essence of the okrika for Western Fashion brands and failed miserably. The fact that we do not seek to understand and celebrate these people and how they reinterpret their circumstances and culture through clothing is telling in and of itself.
The average Nigerian is dirt poor, living on less than $3 a day. The average flip-flop on ASOS costs about 5 dollars. They simply cannot afford to not wear second hand clothing. For those of us who are privileged enough to choose, it is imperative that we embrace Okrika and celebrate the creativity that comes from taking the old and reinventing it as new. The lives of others and our very planet depends on it.
Clothes are clothes are clothes.
Ultimately you, not labels, not branding, not celebrity, determine what is cool.

Six struggles you face as a sneakerhead in Lagos

Next Article Drake, Chance the rapper and why we seriously need to talk about touring in African music