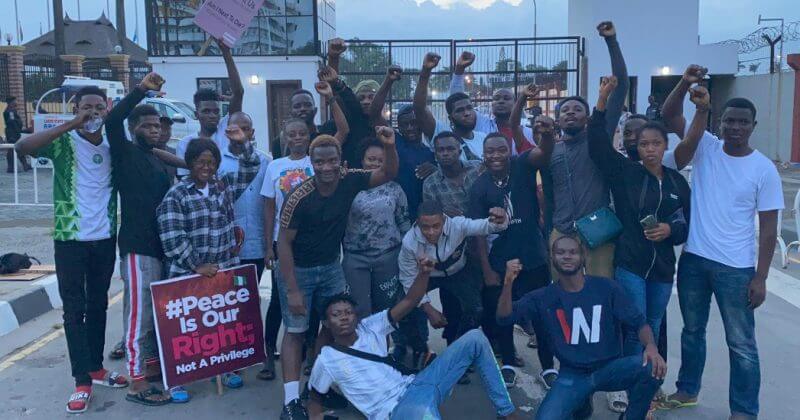 How Alausa became the center of the #EndSarsProtests in Lagos

Over the weekend, the brewing condemnation of the heinous acts committed daily by the Special Anti-Robbery Squad (SARS) resulted in nationwide outcries from Nigerian citizens who rose up in arms to fight back against the reign of terror and fear that has been instilled by the police subset on the citizens it is meant to protect. Following the killing and death of a young man in Ughelli, Delta State, the years-old hashtag, #EndSars became a clarion call for Nigerian citizens, particularly for young Nigerians to once again share the atrocities and gross mistreatment they had suffered under the hands of these brutal enforcement agencies.

Musicians including Wizkid, Naira Marley, Olamide, WurlD, Runtown, Falz, and more, have all spoken out against the callous injustices being perpetrated all across the country. On Tuesday, Naira Marley was set to lead some of the nation’s youths willing to take to the streets and peacefully protest to call for the end of SARS but that shortly fell through when the rapper shared that he would be conducting an Instagram live with the Police Force PRO – DCP, Frank Mba. The major takeaways from the Instagram Live were that the complaints of the people had been heard loudly and clearly and swift and effective action would be taken to end the tyranny of the FSARS.

Following this, other musicians such Runtown and Falz went ahead to lead peaceful protests yesterday starting from Lekki. Concurrently, while this was going on, protests around the country sprouted up in Abuja, Delta, Ibadan, Owerri, and other locations around Lagos including those who besieged the police headquarters in Ikeja. Though the efforts made by Runtown, Falz, and a host of other public figures gained enough momentum to spur citizens into action by joining them on the streets and online, it was the efforts of a small group of 43 protesters who braved the cold night in Alausa last night in close proximity of the Lagos State House of Assembly that became the unsung heroes of the ongoing efforts to disband and end the reign of SARS on this country.

According to the reports on the Twitter account of an Anti-SARS page (@AntiSARsGeng), protesters had spoken with the Chief of Staff of Police earlier in the day informing him of their choice to take up residence in Alausa overnight, in order to gain an audience with the House of Assembly the following morning. What would follow in the next few hours, observed by many of us on social media, was careless treatment of the protestors who choose to fight for their country and stay overnight.

We’re still live at Lagos state House of assembly. After the commissioner of police gave assure that the protest will be peace. He’s here with armed squad to intimidate us. The state has failed us.
43 of us are here #EndSarsProtests #EndSarsNow #ReformPolice #ReformPoliceNG pic.twitter.com/RZitv8FafQ

The Nigerian police opened fire and tear gas on the protesters, purposely destroying their tents and supplies and displacing those on grounds who only wished to involve in a peaceful protest. As the protesters weaned in numbers, the Nigerian police saw ample opportunity to intimidate the 43 brave Nigerians who remained in Alausa overnight. In the accounts of Anti-SARS Geng, they were beaten and bruised by police in the area who sought out to provoke them to retaliate. As the police pushed back against these protesters, these unarmed participants took to social media to document the atrocities being committed in Alausa seeing as local and national media were painfully quiet.

Under the #ALutaContinua hashtag, many young people who spent the night under these frightening conditions documented their story which involved having to sleep with mats and belongings on the floor after efforts from the police to seize their tents and restrict those willing to donate tents in the Alausa area. This morning, news reports coming from Alausa and environs showed that the scheduled meeting of the House of Assembly did take place this morning, with some protesters being granted entry into the meeting.

According to a Twitter thread by Funmi Oyatogun, the House of Assembly was reviewing a petition submitted yesterday against the FSARS police unit which requests the disbandment of SARS and an investigation into the defaulting officers who harass, extort, harm, and kill innocent citizens. According to the thread, the opinions of the speakers of the House were divided with some agreeing that the actions of the police unit were unjust and others claiming it was only a few bad eggs harming the image of SARS officials and would only require reform at the recruitment stage to curtail the employment of the ‘bad eggs’. Though the House of Assembly do not possess the power or jurisdiction to overthrow SARS, they do have the power to confer a resolution calling for the end of SARS and their meeting today showed a lack of promising results yet again.

1. Full disbandment of SARS.
2. Investigation and prosecution of wanting officers who harass, extort, injure or kill innocent citizens. Same for the officers they report to.
3. Compensation to victims.
4. Publication of sanctioned officers.

Nonetheless, the protests continue into day 4 today in front of the House of Assembly. Nigerians are tired and will not be relenting on their courage and determination to bring the menace of the SARS unit. So far, the vast majority of the #EndSARS protests have been peaceful, as many people protesting are doing so just to see change happen within their lifetimes and to avenge the lives we have lost since the inception of SARS.

These are the brave 43 who stood their ground against the police yesterday:

The heroes!!! Some of them you might or might not even know! But they have stayed up all night to send a message to the world! I hope the message is loud and clear!!!!
We still dey!!! ALUTA CONTINUA 💪🏾 pic.twitter.com/GV6bJ4cmpq

The NATIVE team spoke to some protestors about their experiences at the protests and with SARS, and here’s what they had to say:

I was coming from a conference at Lekki. I live in Somolu and when I got to that Charly Boy stop they stopped me. They said I looked like a cultist cause I was wearing a black shirt and black trousers. They  asked to see my phone but I refused because I had sensitive company content in it. They threatened to shoot me. They said it wasn’t more than my girlfriend’s nudes that I had in my phone. They won’t let me go till I transferred 20k to one of the many accounts.

I was driving at night, on my way from an event where I was gave a speech. They initially accused me of speeding but I wasn’t and they were drunk. When I accused them of being drunk, they ask me to find something for them(bribe them). But i refused. They eventually let me go

They stopped me on the street, it was around Ojota. They asked me to give them my phone, so I did. We started to banter while one of them went through my phone. I had pictures I of some axe decor I saw at a restaurant(Spur), and as soon as they saw the picture their mood changed and they said I was a cultist. They told me to get into their van but I didn’t. I wouldn’t enter and I kept arguing for my innocence till I got emotional and started to cry. That was when told me I could go.

They need to continue [the protest]. Why are they killing our children?

I don’t respect what the IG is saying. They have to end sars.

I was staying at a friend’s place when they broke into the house. They carried him and all the boys living in that apartment building. I was so scared but they left me alone and took all the boys. It was honestly traumatic. I’ve never seen that many guns.  I was scared they’d shoot and kill someone.

For more information on how to help out from home, please visit here.

Tami is a staff writer at the NATIVE. Tweet at her any useful resources or leads on the #EndSARSProtests @tamimak_

ICYMI: Here are ways to support #EndSARS protesters and call for justice

Next Article The Nation is United in Our Fight To #EndSARS