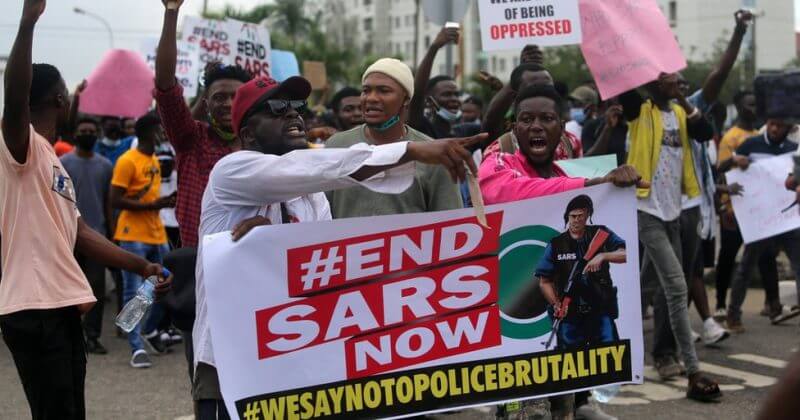 End SARS protests have resumed across major Nigerian cities including Lagos, Ibadan, and Abuja today. Since the first wave of the protests dispersed about 6 weeks ago, there have been threats from the powers that be, emphasising that a second wave of peaceful demonstrations will not be allowed. More than just thinly veiled threats of dispersing any further iterations of the protests, they have also been sure to send a message across with their responses from detaining protesters and confiscating passports to shutting down FemCo’s website and more.

But growing agitation from young Nigerians continues to rise, as none of the original 5For5 demands have been met by the Nigerian government. In the past few weeks, there has been continued resistance from the government and armed forces towards gaining justice for End SARS victims and their families. In judicial panels across the country, summoned defaulting officers do not show up to the panels, the government is still waging war on social media, no one has taken responsibility for the massacres that took place on October 20th despite the detailed CNN investigative report that revealed the Lagos State government’s invitation of the Nigerian Army to the Lekki toll gate.

While upcoming protests are gaining steam, there are already attempts made to quell the protests have already begun. Earlier today, news of the protests in Lagos was met with swift action from the Nigerian armed policemen and soldiers who were said to have been deployed to the Lekki toll plaza, Lagos, according to Punch NG, while other armed forces have also been sighted at other areas in Lagos state including Opebi, Alausa, and Ikeja.

In a statement on Sunday, the Police Public Relations Officer, SP Olumuyiwa Adejobi, had said the command would not allow any demonstration under, since Lagos residents were still nursing the injuries of the violence that trailed the #ENDSARS protest.

With the news of the End SARS protests reemerging in cities across Nigeria having reached social media over the weekend, the online protests have also kicked off with the #EndSARS hashtag now trending in Nigeria, UK and the US for a second time this month. It seems like we may very well be on the verge of another nationwide protest as young Nigerians are showing up in and organising new demonstrations in many states around the country.

It has been brought to our attention that there are fake videos circulating on verified news sites about protesters at the Lekki toll gate. There were no protesters stationed at the toll gate yesterday but there has been armed forces presence at the toll gate reported both yesterday and today, a report on Arise TV reads. In a statement yesterday, the Lagos Police Command said, contrary to viral videos on social media, no #EndSARS protest was staged at the Lekki toll plaza on Monday.

“The video was one of the viral videos released during the recent violent #EndSARS protest before the Lekki Tollgate plaza was set ablaze by the violent protesters on October 21, 2020. The command, therefore, urges the general public to regard the video as baseless and mischievous.

The Command also wishes to appeal to the general public to remain calm and go about their lawful businesses as the police are prepared to deal decisively, within the ambit of the law, with any act of lawlessness that could lead to the breakdown of law and order in the state.”

According to the Guardian, news of the imminent resurgence of the End SARS protests led President Muhammadu Buhari to warn young Nigerians, yesterday, that while citizens were at liberty to freely express themselves in a democracy, such latitude did not include acts of hooliganism. He stated that anyone that would hide behind lawful and peaceful protests to commit a crime would be dealt with decisively to ensure peace and stability in the country.

However, despite the warnings, protesters hit the streets of Osogbo, the Osun State capital, to demand the release of all detained protesters and the unfreezing of their accounts by the Central Bank of Nigeria (CBN).

ICYMI: An update on the Nigerian Police response to #EndSARS

Next Article Turntable top 50: Omah Lay climbs to the top of the charts