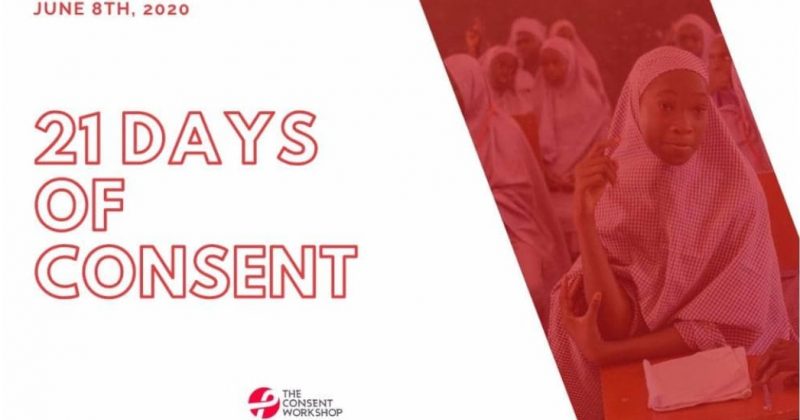 It can be hard to keep up with the rapid pace of events unfolding during lockdown. The past week has been particularly difficult as black communities around the world, and particularly in the US, battle to dismantle the institutional racism, which has resulted in the loss of innocent lives.

It seems as though injustice all over the world is being tackled, as here in Nigeria, we’re also experiencing an uproar, following the loss of life to gender-based and sexual violence (Let’s continue to say their names: Uwa, Jenniffer, Barakat, Farishina, Azeezat, Peace). This has led to a number of women around the country, rallying behind one another, and sharing their sexual assault and also a general consensus for society to drop harmful beliefs that contribute to rape culture.

#21DAYSOFCONSENT has begun. Follow us on @ConsentWorkshop so you can be part of this great fight for rights. #NOMEANSNO pic.twitter.com/NJ98WiSBqE

The battle against sexist and misogynistic beliefs is an ongoing one that we must not relent on, as long as we have leaders and lawmakers in positions of powers harbouring perverse and outdated knowledge of rape and rape culture (see: ‘men are not wood’). All across our social media timelines, Nigeran women are speaking up; telling stories which would typically be silenced, and they are being presented on the center stage for all to see. Since the police and law enforcement are hell-bent on victim-shaming and typically take sides with perpetrators, we must take matters into our own hands and clean up the streets by changing the casual attitudes towards sex and a woman’s autonomy.

To this end, our friends over at The Consent Workshop, have risen to action and are calling for a #21DaysofConsent digital campaign which will start from today. These twenty-one days will be dedicated to having these hard and uncomfortable discussions about the systems and practices put in place to propagate rape culture as well as addressing the myths and facts that surround them.

Speaking to the NATIVE, founder Uche Umolu explained that:

“For about 2 years now, The Consent Workshop has been actively educating the community on the different elements of rape culture. Devastated by the horrific sexual violence cases garnering attention, we at The Consent Workshop believe its the best time to collaborate, strategize, and address the sexual education gap that exists in the country. There’s a rotting problem.

As an organization, we want to provide Nigerians, the preventative resources, and tools for the community to make more positive healthy decisions. We hope this campaign is a start to de-normalizing rape culture in Nigeria as we know it. Rape culture has its foundation in our systemic and cultural beliefs. This campaign aims to start the conversations that reverse this.

To start off, we’re dedicating today to our sisters, daughters and our friends whose lives were taken from them by rapists. Let’s promise to break down the pillars of rape culture in every way possible. #TCW21DaysofConsent pic.twitter.com/R3aJLQ040j

ICYMI: The need for institutional reform in light of sexual assault laws in Nigeria