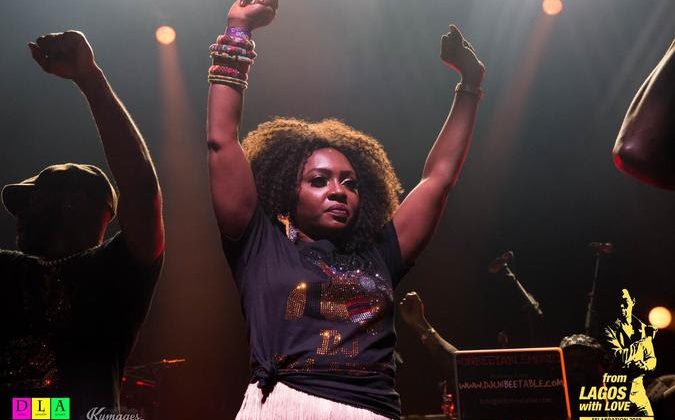 The annual Felabration festival Yeni Kuti started to honour the memory of her late father, Fela Kuti, kicks off next week, 14th of October. The week-long event is returning to Nigeria after holding its first-ever edition in London back in July, and it’s bringing with it a new theme, ‘From Lagos With Love’, inspired by Fela’s “Eko Ile” single but also acknowledging the international relevance of the festival.

Between the 14th and 20th of October, concerts, a symposium, a dance competition, art competitions and debates among selected secondary schools in Lagos will be held in honour of the Afrobeat legend and the ideals he believed in. There will be a ‘Dress Like Fela Day’ on the 19th of October with the winner earning a cash prize.

Chimamanda Ngozi Adichie, Bobi Wine, Professor Akin Oyebode and London based Black African musician, poet and political activist, Akala will speak at a symposium on the opening day, 14th of October, at Neca Hall. But the secondary school debate on ‘Persons above 70 should not be allowed to contest for political position’ will be held this Wednesday, on the 9th of October at Freedom Park.

Femi Kuti, WizKid, Davido, Burna Boy, Simi, Seun Kuti, Mr Eazi and other A-list Nigerian artists have graced the New Africa Shrine stage in the past. This year promises to have these A-lists and their international colleges perform on the Felabration’s stage. The Pan African Orchestra from Ghana have already been confirmed.

ICYMI: Watch this rare clip of Fela performing at the Glastonbury in 1984

Next Article Here’s the cultural significance of new documentary, Sex For Grades