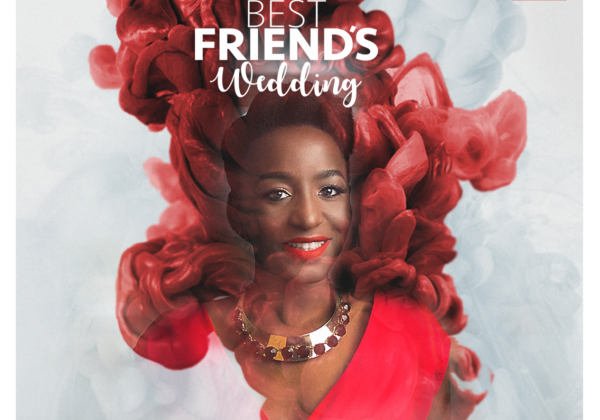 Today is definitely a good day. I moisturized, put my hair in a fineapple, finished all the my work on time and prayed to the Gods that the new episode of Our Best Friend’s Wedding (OBFW)  would be the one where things will finally start happening. Praise the Lord, he answered.

If you haven’t seen the new episode of OBFW, you can watch it below or check out the entire thing on Youtube. Or you could just skip all of that and let me gist you.

Hmmm! Where were we? Oh right.

Jade got her ass handed to her in Episode 8 after she went and overestimated how much access her fancy new title as Tunde’s girlfriend would get her. Charles crossed out yet another woman from his potential wife master list and we’re no closer to finding out what the hell is wrong with Charles’s mother. That is why when episode 9 opens with Jade three weeks after the events of episode 8 I’ll admit this was me.

Jade is at home ‘working’ when she keeps getting assaulted by a persistent caller, most likely Tunde. Someone rings her doorbell (not a pun you pervs) and she reluctantly goes to check who’s at the door. Of all the people I’d expected at the door, I never imagined Tolu, Tunde’s famzing P.A. Jade understandably isn’t about to hear ANYTHING that conniving woman has to say and tries to slam the door in Tolu’s face and ends up slamming it on her hand.

Meanwhile Charles shows up at Kemi’s ‘office’ with coffees and cake, cos appaz the ‘Oracles’ have told him she needs some cheering up. At it’s kind of obvious that the OBFW show runners were just like, ‘we already have too many subplots juggling up in the air, let’s give Kemi an absent husband and call it a day’, cos we’re 9 episodes in and we haven’t even heard Kemi’s husband’s voice. How do we know he isn’t a spirit husband?

Kemi sha steers the topic over to marriage shenanigans. Charles has run out potential brides and finally concedes that his idea was incredibly stupid in the first place. After the chest pain that seeing Jade out of his friendzone and swapping spit with another guy, he’s finally warming up to the idea that just maybe he friendzoned baby J because he thought she’d be there forever.

Jade on the other hand is bonding with Tolu after bandaging her hand.  Turns out Jade used to travel the world with the Red Cross getting her Angelina Jolie on but quit because there were ‘people’ (a.k.a. Charles) that said job was keeping her away from. They get to talking and Jade accuses Tolu of sabotaging her relationship with Tunde. Tolu doesn’t convince Jade (or us) that she doesn’t have a crush on Tunde but she at least cares enough for him to swallow her pride and beg baby J to take Tunde back. Conveniently Tunde calls after, and they make up, kind of. And Jade tells him before they can get back together, they need to ‘talk’.

Mama Charles makes a surprise reappearance of her own, calling Charles after he has gone months, and sex fueled craze to find her a wife without actually talking to her. She reminds him her birthday in a few days and tensions him about bringing her a wife. Then she cryptically, or not so cryptically tells Charles she needs to introduce him to ‘someone’. But because Ogbofudo Charles never actually listens when a woman is talking to him, he waves her off and ends the call. And Mama Charley turns over to that Doctor from episode three and tells him she wants to tell Charles ‘face to face’.

Onome (who has lowkey become the show’s most exciting person) is at a bar ordering Mimosas taking a call from an ‘Olivia’ when she drops a bombshell, she’s ‘keeping it’.

Of all the people to be sitting next to her, it’s Kemi, who like Gbemi turns out to be a radio show OAP. She and Onome get to talking, and Onome spills a lot of subtle tea (definitely a pun) about the father of her child (it’s not Charles) and what it would mean for the rest of her life. Kemi is actually a decent human being and gives Onome some quality advice before homegirl exes to go and face her demons. Jade calls not long after with news of her and Tunde’s pending reunion. Kemi brings up again the as yet unmentioned thing she and Tunde need to ‘talk’ about. Whatever it is, it is obvs huge.

Charles on the other hand is busy scrolling through his contacts looking for who to knack. Bobo yi is an idiot.

If your 58 something year old mother who raised you as a single mom has to tell you face to face that she has finally found someone she wants to be knacking on the regular, just maybe, just a tiny bit, you might be a fucking jerk. Just maybe.

But nothing Charles is/does should surprise us at this point.