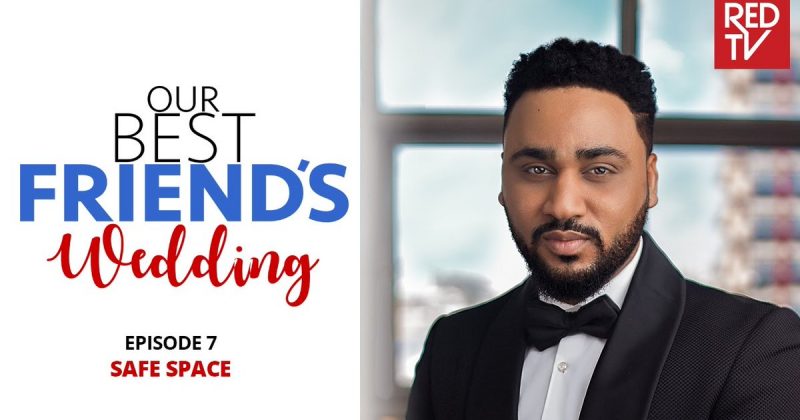 We’re seven episodes in and we need a hail mary of an episode to rescue OBFW from its inability to give us any multidimensional characters.  Episode six ended with a cliffhanger that puts Onome (yet again) back in Charles’s orbit. It seems the perfect opportunity to humanize her and show that contrary to all the evidence we’ve seen so far, Charles can actually step up to the plate and act like a decent human being.

Or pigs will fly.

If you haven’t seen the episode you know what to do.

It’s morning after Onome’s dramatic appearance at Charles’s front door (let’s not forget she has only slept with him once and the second and third time they met, she threatened his job by giving him a bad review and then extorted him) but yeah, Charles is not the kind of guy to turn ANY woman away.

Onome definitely doesn’t seem like someone who got given a black eye and felt so terrified she ran to the random guy she had a one night stand with and proceeded to extort. Not one bit. Instead she’s all ‘flirty’ in bum shorts, tickling his nose with some thread and suggesting very strongly that she won’t mind if he tries to boink her. She then forms ‘I’m leaving’ and Charles predictably takes the bait and asks her to keep him company.

On the other end of town Jade has miraculously managed to tear Tunde away from his work long enough to go on a picnic date with her. Let the court note at this point that Oreka Godis has the most laid hurr in all the land. Tunde has news by the way, about work of course. Turns out the reason his startup has been taking so many hits is, his accountant and chief technicians have been siphoning valuable capital into their pockets. His ‘sexy’ assistant Tolu from the last episode was the one who found out, she ordered an independent audit and found the breach. At that point Tolu starts calling (again) and Jade has to seize Tolu’s phone to get him to focus on the date.

Knowing how wink-wink, nod-nod the show runners behind Our Best Friend’s Wedding have been about their plot twists, I wouldn’t be surprised to find that Tolu and Tunde have been boinking, or are boinking.

And Jesus, is everyone on this show except Charles and Promise Yoruba?

Charles and Onome on the other hand are bonding over their family histories. Turns out Charles can cook (+1) and was raised by a single mother (+1). All that is left to tip him firmly into ‘male feminist’ territory is a personal declaration that he respects women. Onome on the other hand cannot seem to relax cos her phone has been ringing non-stop. Our ‘good’ guy tries again to get Onome to open up about how she got her black eye and she asks him to give her one his secrets in exchange for her. It’s official folks, we’re back in high school.

It is actually great that Jade is finally moving on from Charles, because over in Tunde land all the conversations are adult, if a little corny. They’ve spread out the meal for their date and over red wine drunk in blasphemous plastic wine glasses, they get into the nasty about their body counts. Turns out Charles has racked up an impressive 37 women in his knacking career (though we suspect the numbers are a lot higher). Of those 37, he says he’s only dated 5 and only been in love with one, and by one he means Jade.  Corny muthafucka.

Jade on the other hand says she’s only been with 12 men (the number is probably lower), dated 5 of that 12 (divide that by 3) and loved one (a.k.a. Charles). They get googley eyed at each other and a ‘moment’ passes between. Issa true love goyz.

Kemi on the other hand, Remember her? The sensible friend who exists to move the plot along? Yeah so they finally remembered her subplot about the absentee husband and they throw us a bone about him and his never ending trips. Still doesn’t say shit though.

Charles and Onome are trading secrets, and Mr good guy’s ‘secret’ is apparently that he bought a ring. Onome knows jack shit about him, how is that a secret? Appaz, Onome’s secret is that her boyfriend gave her the black eye. Charles (and I) were surprised that baby geh has a le boo and the money she hustled from him never comes up. Also this makes it three women with husbands and boyfriends that Charles has slept with. Charles WYD though?

Even worse, he’s actually supposed to meet up with Jade and Kemi for one of their reconnaissance meetings, and he’s ditching them to for this? Jade understandably is panicking that since the Friendzone boo and the ‘I’m too busy to have your time’ boo, Charles has started giving her the cold shoulder. Why wouldn’t he though, when he’s too busy using a battered girlfriend’s vulnerability to get box.

Yeah, Charles and Onome end the day with some good old casual sex.

And Promise, our show’s other plot device get an advancement of his own. Out of nowhere, Tega his drug dealer drops him a second package. You know what happens after that.

Where is Mama Charley? For someone who is dying, Charles seems not to care at all about his mother’s well being. We shouldn’t be too surprised though, from how Charles treats women on the show, he doesn’t really care about any woman.

I pity whoever eventually marries Charley. I pirry her.

Third, Thirteen minutes is less than a coffee break. Give us proper episode or don’t bother at RED TV.